It has been rewarding to see the Enclosed Garden come to life this summer as our fruit and vegetables began to flourish and as a result we have been able to send a regular, weekly picking of fresh fruit, vegetables and herbs to the local food bank, ‘Ladies of the Rock’.

The polytunnels really do help us to grow a huge range of crops which all seem to thrive, tucked away from the cold winds or chilling rain that forms so much of a part of the Scottish weather. Our parsley has grown into massive bushes bordering a couple of the beds as the individual plants spread until they touched and became like one continuous edging and our tomatoes produced a marvellous crop which lasted till the end of October. On the 8th November we sent the final harvest from the gardens.  In addition to kale and stir-fry greens, we were able to include a full box of apples from one of our ancient apple trees- ‘Laxton Superb’.

However, all good things must come to an end and, sadly, we are unable to provide anything for the winter months though we might manage a pick of salad leaves for the Christmas week. We were only able to send 13 kgs. as our last donation but that lifted our final total of fruit and vegetables supplied to somewhere in the region of 1,200 kilograms of fresh food – a total we are rightly proud of, a credit to the hard-working garden team and a tough target to beat next year.

Please remember the local food banks when you are stocking up for your Christmas meals. 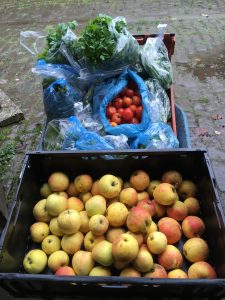 In the middle of November we were involved in the exciting project to remove the huge growth of ivy from the front of Bannockburn House. No-one knows when ivy began to grow up the corner of the house but it has been there, untouched for a long time, growing all the way up to the roof, wrapping itself around drainpipes, the lightning conductor and anything else it could grip.

Climbing Ivy is a curious, evergreen plant. The juvenile plant has thin, climbing stems with small ‘rootlets’ that allow it to cling to surfaces for support. Its glossy leaves have the familiar three or five-pointed ivy leaf shape. As it matures, the stems become woody and stiff and it effectively becomes a ‘tree’. ‘Tree ivy’ when pruned grows back as a woody plant and does not revert to the flexible, juvenile form. Mature leaves become oval or heart-shaped and the ‘tree’ produces ‘drumstick’ clusters of yellow flowers late in the year, an essential food source for insects during autumn and winter. In January, pigeons and blackbirds will strip a plant of the nutritious black berries when little else is about so if you have a wild corner in your garden I would encourage you to allow some ivy to take root. It is a really valuable habitat for hibernating insects and nesting birds. It’s great for flower arrangers and your Christmas decorations would be bereft without the holly and the ivy. 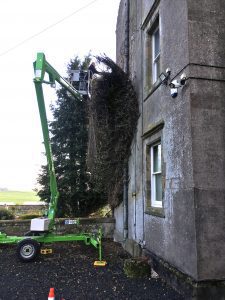 This mild autumn has been great for fungi as they love damp and warm conditions but even in November, we can still find some of the rarest and most colourful fungi that grow in Scotland.

Waxcaps thrive on long-established or ancient grasslands which are typically unfertilized and nutrient-poor with short grass that is regularly grazed or mown and rich in moss. They grow in a rainbow of colours from rich scarlets and lemon yellow to purples and even green but we don’t know very much about them and they are disappearing. In the past 75 years more than 90% of the possible sites have vanished and the many of the species are now endangered or even on the Red List at risk of extinction. If you own or manage grazing land be aware that some unimproved pasture could be ancient and rich in waxcaps and so will be damaged by fertilisers, ploughing and re-seeding. Likewise, if you have a lawn, no matter how big, try to avoid the temptation to fertilise it or to treat with chemicals to remove moss. Remove the clippings when you mow and try to keep some areas free from trampling. Waxcaps are some of the finest jewels amongst Scotland’s fungi and they will continue to produce mushrooms until regular winter frosts set in. This picture is one of our Scarlet Wax Caps but you might see one of the other vibrant colours when out and about. 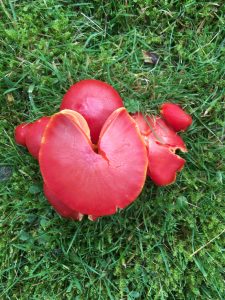 To receive the latest news from Bannockburn House, please fill out your details below.
← Battle of Sheriffmuir Stirling Council invests £600K in community projects as it celebrates local hero who made his mark in San Francisco →
BOOK NOW
X
X