Bonnie Prince Charlie (1720-1788) was born in Rome to James Francis Edward Stuart (exiled Stuart King James VIII, the Old Pretender) and Clementina Sobieska. His younger brother Henry Benedict followed in 1725. Charles was fluent in English, French and Latin and in some accounts described as speaking in a soft English accent. Bonnie Prince Charlie set out from France in July 1745, to raise an army and reclaim his father’s throne. Landing firstly in the Hebrides before planting his standard at Glenfinnan (where a monument now stands) thus setting the course for the “45” rebellion.  Gathering troops and support he headed south to Glasgow arriving at Bannockburn House on 14th September 1745. The Prince dined with Sir Hugh Paterson (a Jacobite supporter in the 1715 rebellion) then travelled on to meet the Earl of Kilmarnock at Callendar House in Falkirk. A few days later he reached Edinburgh, taking the town on 17th September. By the 20th of September the Jacobites were in Prestonpans facing the Hanoverian forces under the command of Sir John Cope. After a short battle on the 21st, the Jacobites gained their first main victory. They then marched south towards their goal of London reaching Derby by the 4th of December. Reports reached the Prince that larger Hanoverian forces, recalled from the continent were gathering to defend London. On advice from his chiefs and advisers he turned his troops northwards again to Scotland. They arrived back at Bannockburn House in early January 1746, using the House as his headquarters (HQ). The troops set up camp in the area and the siege of Stirling begun. The town itself was surrendered on the 8th of January. However, the castle, under the command of General Blakeney, did not surrender (read more about key of Stirling) and the troops continued unsuccessfully, to lay siege to the Castle.

During his stay at Bannockburn House, the Prince became unwell and was nursed by the young niece of his host Sir Hugh Paterson, Clementine Walkinshaw. Romance blossomed between the young couple and she later became his mistress. 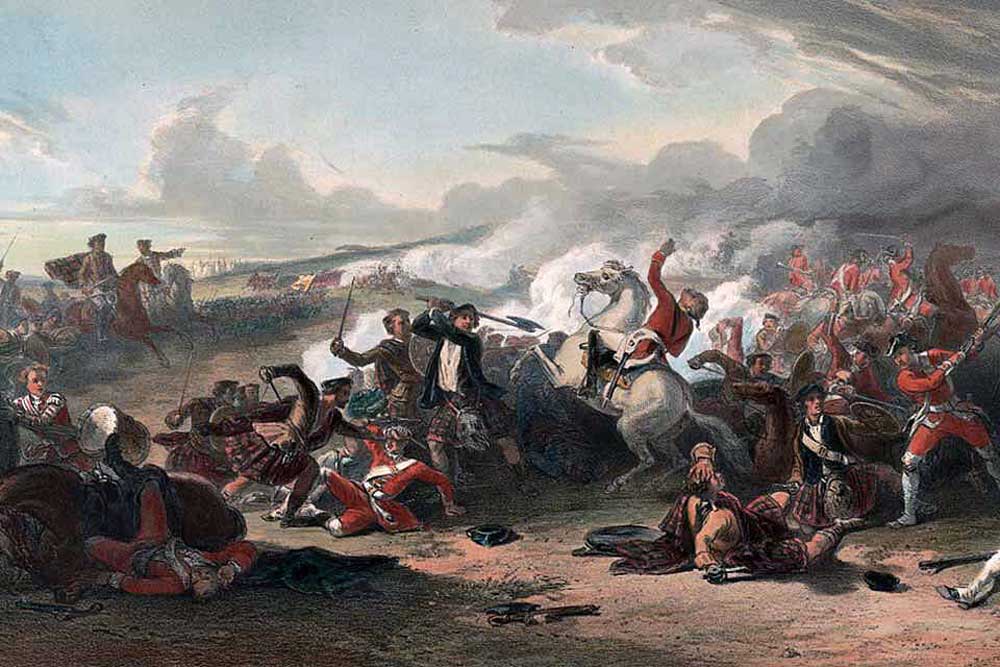 The 17th of January saw another victory for the Prince’s troops against the Hanoverians under General Hawley at the Battle of Falkirk. General Hawley was heading to relieve Blakeney at Stirling.

By the end of January, it was clear the Jacobites could not breach Stirling Castle. News reached the Prince that the Duke of Cumberland and his troops had joined with General Hawley in Edinburgh and were marching towards Stirling. The decision to head north was taken with the Jacobites reaching Inverness in April. By this time the men had experienced a long winter campaign and march and were suffering the effects of these hardships, not in the best fighting condition. Both sides met on Culloden Moor on the 16th of April. This was the final and bloody conflict of the “45” rising. The Duke of Cumberland’s forces defeating the Prince and his Jacobites. The Prince escaped the battlefield and spent some months in the Highlands and Islands as a hunted man. Aided by many and on one notable occasion escaped capture dressed as a woman, the servant of Flora MacDonald. The song ‘Over the sea to Skye’ alludes to this. The Prince did elude capture taking ship for France and safety. In 1752, Clementine joined the Prince in exile and the following year they had a daughter Charlotte, (the Duchess of Albany). The relationship soured and Clementine and the young Charlotte estranged from him around 1760. Although the Prince did marry Princess Louise Stolberg-Gedem in 1772, this union failed and was childless. By 1784, he was alone again and legitimised Charlotte, who it’s rumoured, left her own family to nurse him in his last years. He died from a stroke in 1788 and was buried in Frascati Cathedral. His brother Henry Benedict was Cardinal there. He was later re-buried in the crypt of St Peter’s Basilica in Rome (with his father and brother) where he rests to this day.