The 13th November is an important date within the Jacobite Calendar as this year it commemorates the 307th anniversary of the Battle of Sheriffmuir. 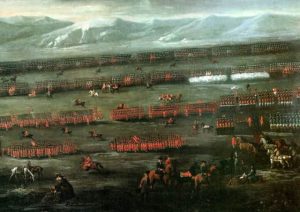 On 13th November 1715 on the heathery moorland of Sheriffmuir, near Dunblane two armies engaged in a hard-fought battle which was to decide the fate of the 1715 rising. The commander of the Jacobite army on the day was John Erskine, 6th Earl of Mar who had formerly supported the accession of the Hanoverian King George I. However, Mar soon fell out of favour with the King after being dismissed from his position as Secretary of State for Scotland. In the hopes of restoring his prestige and influence Mar initiated a Jacobite uprising by raising James Francis Edward Stuart’s (known by the Hanoverians as the “old Pretender” or acknowledged by the Jacobites as “King James VIII”) banner at Braemar on 25th September 1715. By proclaiming James as King, Mar had set in motion the 1715 rising which would prove to be the greatest opportunity for the Stuart dynasty to reclaim the British crown. Mar was supported by other Scottish nobles and together they were able to successfully mobilize an army of 6,000 men. By October Mar controlled all of Scotland north of the Firth of Forth, with the exception of Stirling Castle. However, Mar’s military inexperience soon became apparent as he delayed besieging Stirling Castle for over a month allowing government forces to mobilize. The government forces were under the leadership of John Campbell, 2nd Duke of Argyll and Chief of Clan Campbell were now able to intercept Mar at Sheriffmuir. A professional soldier who had distinguished himself during the Spanish War of Succession [1701-1714] Argyll was secretly apprehensive about his army’s chances of success. This was in relation to Argyll’s army only numbering some 3,000 men which was mainly composed from ill-trained lowland militia men. 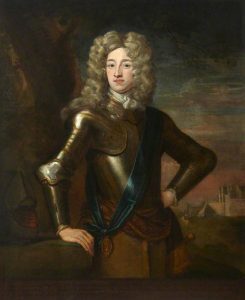 As the fighting began the Jacobite right wing composed of Highlanders was able to successfully capture the Hanoverian left wing. However, the Jacobite left wing which had received no cavalry protection was beaten back by Argyll’s cavalry and the disciplined fire of his infantry. As the battlefield became dark hostilities soon halted and each army retired to their respective camps with no conclusive outcome. The next morning Argyll’s depleted army returned to Sheriffmuir but Mar had decided to retreat. In many respects the battle was a psychological victory for Argyll as many of Mar’s dejected soldiers drifted back to the glens. The battle of Sheriffmuir itself was ultimately a comedy of errors on the part of Mar, who refused to take good professional advice from the military experts around him. Fundamentally Mar’s failure and incompetency to advance upon Argyll’s remaining 1,000 men meant that the Jacobite cause was doomed to failure. On 22nd December 1715, James Francis Edward Stuart landed at Peterhead but he was too late. Had James arrived earlier to take command of the army the outcome of the rising may have been different. However, not even he could rouse his demoralized troops after news that Argyll’s army had been reinforced with 6,000 seasoned Dutch troops. Eventually in February 1716, James along with Mar fled to France finally concluding the failed 1715 rising. 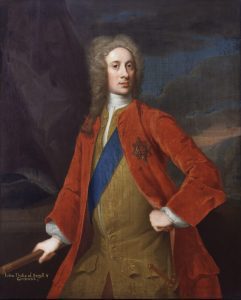 A notable participant on the Jacobite’s side during the 1715 rising was Sir Hugh Paterson III, 3rd Baronet of Bannockburn who in the aftermath of Mar’s defeat had his lands forfeited. Alongside his brother James and his brother-in-law John Walkinshaw of Barrowfield Paterson was forced to flee Scotland. Eventually, Sir Hugh Paterson III came to reside in Holland where he operated as an intelligence gatherer and unofficial paymaster for other Jacobites in the low countries. Paterson’s exile was a dismal affair characterized by living “frugally” and receiving little information from Bannockburn. It was only in 1720 that Paterson’s fortunes were greatly improved as Lord Grange a Jacobite financier bought Paterson’s forfeited lands for a 20 years purchase, amounting to £7,388. As Patterson returned to Bannockburn his attitude towards Jacobitism was still unwavering and his deep-held sympathies for the Stuart cause were to resurface during the Forty-Five rising.

Prior to the Battle of Sheriffmuir Paterson’s name had appeared on a List entitled “Act for encouraging loyalty in Scotland” issued on 30th August 1715. The Act listed 44 Scottish nobles who were suspected of being Jacobite sympathizers to present themselves at Edinburgh court. Out of the 44 names only two Scottish nobles Sir Patrick Murray of Auchtertyre and Alexander Erskine, the Lord Lyon presented themselves and they were both imprisoned.

To receive the latest news from Bannockburn House, please fill out your details below.
← Pumpkins and Orange Peel Waxcaps in Advent →
BOOK NOW
X
X