So half-term is over, the clocks have gone back an hour and Hallowe’en is upon us!

During October the final warm days of Autumn vanish, leaves carpet the garden and the wind grows colder but, surprisingly, the soil still holds some warmth – so this can be a good time to go hunting for mushrooms and other fungi which will flourish until the first frost.

We have crops of fungi which regularly appear in the garden but an unknown one which surprised us this year is the ‘Orange Peel’ fungus – a vibrant, orange-coloured cup fungus consisting of thin, wavy-edged segments curled around themselves, looking exactly like a piece of discarded orange peel.

Beware, however,  if you find the ‘Fuligo septica’ slime mould growing in your garden this Hallowe’en!  Witches can use ‘Fuligo septica’ or ‘Dog’s-vomit slime mould’ to spoil their neighbour’s milk and the Dutch call it ‘Witches Butter’. I should tell you that this lumpy, yellow blob can move about like an amoeba, slithering slowly overnight so that by next morning it has changed shape and is never quite in the same place as the previous day. Keep your doors and windows shut – you have been warned!

I was looking through some older photos recently and came across a few shots of the Enclosed Garden exactly a year ago, just before we began the lengthy job of creating the path network and the formal layout of beds. It was a shock to see the original, barren wilderness and realise the transformation effected in such a short space of time. You will see from the two photographs that our hard work has paid off and all volunteers involved should be proud of their achievement. It is literally unrecognisable as the same space. In addition, the drastic reduction of the holly hedges has paid off as they are sprouting vigorously, so much so that by next year we will have a a substantial new hedge to trim.

Despite the dry summer and the lateness of our planting in the Enclosed Garden we still have had a successful growing year. Our potatoes and pumpkins grew huge, the beans and peas did their best but were battling rabbits and deer and our sweet peas were particularly showy.

One plant in particular attracted a lot of attention and admiration amongst our visitors. It is a delicate, colourful climber called ‘Mina lobata’ or ‘Spanish Flag’  and it flowers in the orange, yellow and red colours of the Spanish Flag. You can grow this lovely climbing plant relatively easily from seed in a warm place and it is ideal for hanging baskets or containers. Give it a warm, sunny and sheltered location with support and it will reward you with masses of the exotic-looking, colourful, tubular flowers. We will certainly grow it again next year as it was a real showstopper. 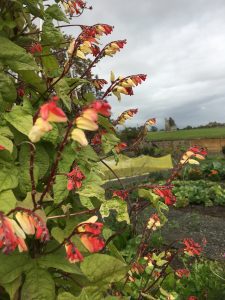 To receive the latest news from Bannockburn House, please fill out your details below.
← Pumpkins galore Battle of Sheriffmuir →
BOOK NOW
X
X