The Apiary in Winter

In winter, honey bees in a colony cluster together for warmth.  Clustering starts when the ambient temperature drops below 14°C – loosely at first but as the temperature drops the cluster becomes more cohesive and compact.  The bees in the centre vibrate their wing muscles to generate heat while the bees on the outer shell (1-3 inches thick) bury their heads into the cluster and spread their wings to form an insulating layer.  This efficient system of heat generation and insulation means that honey bees can cope with very low ambient temperatures and rarely die from cold. Starvation and water are the usual winter killers.

Disturbing the colony means they need to generate energy to get their wing muscles to 27°C to enable them to fly and therefore uses up stores of food unnecessarily.  They are also unlikely to survive if flying in cold temperatures and so, other than to check food stores, we leave them well alone.  They will not leave the hive during winter except for cleansing flights on mild days. 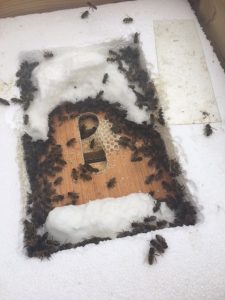 A Hive of Activity

The relatively mild autumn and winter have meant that the bees have been more active than normal for the time of year and have used up their honey stores and we have had to feed them fondant.  Bee fondant is a food for bees consisting of sucrose, fructose and glucose.  In the photograph you can see the polystyrene insulation with a rectangular space for fondant. This was taken on 12 December and it is unusual for so much fondant to have been eaten this early.  We have had to top the hives up twice since then.

The queen will start laying soon (she may even have started due to the mildness of the season) and the colony will be particularly vulnerable in early spring when brood rearing is increasing in parallel with a dearth of forage.  Stored pollen from last season will be used to make brood food until fresh pollen is available. 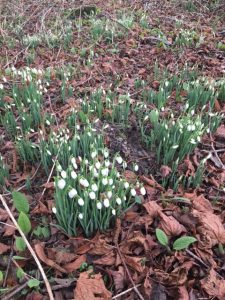 Snowdrops (Galanthus nivalis) are one of the earliest sources of pollen and are already out in the grounds of Bannockburn House.  On mild days the bees will be out foraging and return to the hive with pollen baskets crammed with orange pollen.

Oxalic acid vaporisation of the hives to kill any Varroa mites is an important winter task.  Varroa destructor is a parasite of honey bees that weakens the colony and transmits bee viruses. Other winter activities include making more frames for the bees to store honey, rendering down wax, cleaning equipment and making smoker fuel cartridges so that we are ready for the spring and summer nectar flows. 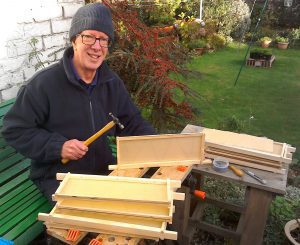 To receive the latest news from Bannockburn House, please fill out your details below.
← Looking Sharp The Gateway of the Year →
BOOK NOW
X
X