A dram fit for a Prince

HRH Charles Edward Stuart arrived at Bannockburn House on the 6th January 1746. He remained at Bannockburn House for the rest of the month, chosen for its strategic location for the Siege of Stirling Castle and considered a place of safety as the Prince had a natural affinity with the Pattersons and the Walkinshaws of Barrowfield (who were historically Stuart supporters and fought for his father in 1715).

It was while the Prince was in residence at the house that he was re-acquainted with Clementina Walkinshaw (niece to Sir Hugh Patterson and named after the Prince’s mother Clementina Sobieska). It was here that their relationship was cemented and it eventually led to Clementina reuniting with the Prince in November of 1752 and bearing him a daughter a year later – Charlotte, the Duchess of Albany.

The journey for the Prince up until January had not been an easy one. The Army was raised at Glenfinnan, then marched to Edinburgh, fought at the Battle of Prestonpans, marched to Derby and back and had just left an inhospitable Glasgow. This was all done during the miserable throws of winter, and it had taken its toll on the Army and the Prince.

It was then no surprise that Bonnie Prince Charlie fell ill when he was at Bannockburn House. He had flu like symptoms (which never really left him and led to pneumonia later on). Like today, flu can be serious and can lead to complications which can cause death so the Prince was looked after by his accomplished group of surgeons, however, at Bannockburn he also had the tenderness of Clementina tendering to his ails. 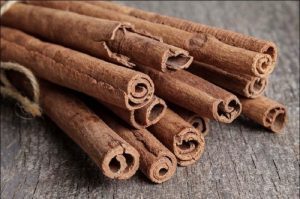 It is believed that Clementina used a well-known apothecary treatment of a ‘Tincture of Cinnamon’ to help alleviate some of the Prince’s symptoms. This was typically an infusion of cinnamon in wine or a spirit (Brandy was widely used or whisky) that was at least 108° proof. The cinnamon (or powder the cinnamon) was soaked in the alcohol and infused in a skillet of warm water for 24 hours, then the cinnamon was strained from the liquid. At this point the ‘warming properties’ of the liquid could taste quite bitter so sugar was often used and boiled in it until it became the texture of a syrup.

Here is an extract from the household accounts from January 1746 while at Bannockburn House: 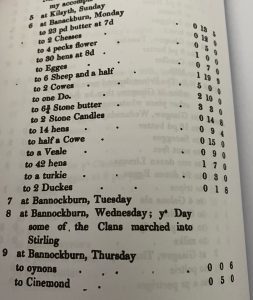 As you can see on the 9th of January 1746 they brought in Cinnamon – a very expensive spice at the time: the 5 shillings paid then would be equivalent to around £56 now. The household also bought a fair amount of claret and wine in the month which could have been used in the syrup. (The Lyon in Mourning volume 3) ­– the £50 spent on wine from Mr Don is around £11,250 today! 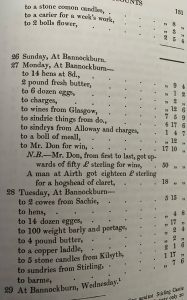 Cinnamon was used as a astringent which meant that it helped dry things up, for example diarrhoea. It was also used to work on the lungs, digestion and circulation as well as warming the spirits! It was believed to be good for clearing mucus from the lungs and sinuses.

Cinnamon was also used in water to purge the patient of their ills. It was highly believed in the 18th century that in order to get better you had to draw out the sickness. Cinnamon in water could break a fever and combined with Honey could be used to ‘purge’ the illness out.

The medicine chest of one of Bonnie Prince Charlie’s surgeons, Sir Stuart Threipland (which survived after the uprising) has Ol. Cinn. – cinnamon oil present in its contents. 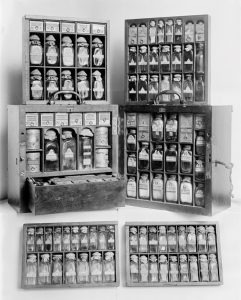 Now, legend has it that the prince carried an elixir with him that was a mixture of Brandy and spices with a touch of sweetness. Could this have founded part of the recipe that was handed to John MacKinnon of Skye that then became the foundation for Drambuie? We will never know but it’s a great story if it was!