The Ancient Port Key of Stirling Returns to Bannockburn House

On Friday the 7th of January Bannockburn House will see a brief return of the Ancient Key of Stirling which had lain hidden within the House for many a year.

The Jacobite army approached Stirling on Friday the 3rd January 1746 surrounding the town the next day. On Monday 6th 1 o’clock the Magistrates and town council received a summons to surrender and give up their arms from Charles Edward Stuart .  The town and council agreed two commissioners (William Christie and James Jaffray) petition Lord Murray at Bannockburn House to delay the 2 o’clock deadline. After much deliberation the next day, Tuesday 7th terms were agreed for capitulation as there was no sight of relief nearing the town.

There followed a second visit to Bannockburn by the above named two commissioners with two deputies, John Jaffray and Peter Stevenson.  They returned sometime after 8 o’clock in the evening. Wednesday 8th dawned and the arms in the town were conveyed to the castle by 9 o’clock and the safekeeping of Gen. Blakeney the commander who had withdrawn his Hanoverian troops from the town to defend the castle. Thereafter the gates of the town were thrown open at 11 o’clock and the Jacobites entered about 3 in the afternoon.

The key is now held by and displayed in the Smith Art Gallery and Museum in Stirling.  It’s stay at the House began when It was surrendered by Commissioners of the “Toun” to the Jacobite forces of Charles Edward Stuart (Bonnie Prince Charlie) 276 years ago to put an end to their siege of the town.  It was left behind when the Prince and his troops departed Bannockburn to march north to Culloden and only re-discovered in 1902.

It was sold in 1960 when the then owner Miss Annie Mitchell was selling the House and auctioned off it’s contents.   It was bought by businessman Captain Charles Hepburn who donated it to the Smith in January 1961.

January marks the start of a month of events from Bannockburn House to commemorate the time that the Prince was in residence during the year 1746 including Lectures and Traditional Dancing.

Check out our other Eventbrite pages for more information on these events. https://www.eventbrite.co.uk/o/bannockburn-house-trust-15687961363 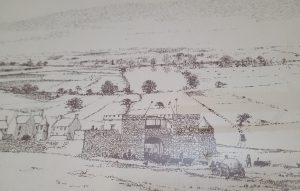 To receive the latest news from Bannockburn House, please fill out your details below.
← WINTER WONDERLAND A dram fit for a Prince →
BOOK NOW
X
X