The Gateway of the Year

And so we find ourselves at the start of another year, in a mild January, in a benign winter.

I visited Bannockburn House on New Year’s Day to check on the gardens and polytunnels after the strong winds of the previous few nights. To my surprise, a clump of brave little snowdrops in full bloom were brightly nodding on the grassy verge as if to acknowledge my ‘first-footing and welcome the New Year’. 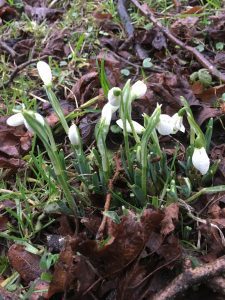 However, on going round the corner, I was dismayed to find that the gates into our protected vegetable garden had been forced open by the gales. My last visit was on December 29th, so it was possible the gates had been open for three days and nights – a heavenly outcome for our rabbit and deer population but not so good for us!

After a quick check I was happy that no furry visitors remained in the triangle area and the tunnels were safe. ‘They’ had only managed to eat a few lettuces and the top of a red cabbage.  Unfortunately the bark on some of our cordon apple trees was nibbled and that may create an ongoing problem but we got off lightly considering the potential for damage. 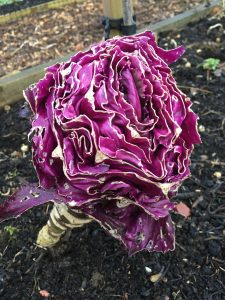 Planning for the season ahead

The construction work we did before Christmas has had time to settle and it was good to walk on firm, dry paths around the old garden. The actual path construction will probably be finished this week but there is still a substantial amount of work involved in creating the surface of the paths and returning the surrounding area into a garden. We are now at the stage of deciding what plants to grow and in a few weeks the polytunnels will become a hive of industry as we begin the exciting job of sowing and growing many of our own plants for the new garden. It has been a long haul working through wet, muddy conditions and cold easterly winds but, generally speaking, we have been lucky weather-wise as we could have had heavy frosts and deep snow or endless rain and quagmires. Let’s hope the mild weather will hold for a few more weeks. 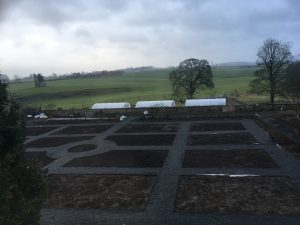 Some things change, some stay the same

Last week, as I was leaving after a long day gardening, the full moon was rising over the Doocot. The air was still, and the garden silent as the setting sun draped the landscape in shades of pink and purple.  I though of the many changes we have brought to the surroundings in the past four years we have owned the house, and wondered what future changes this year would bring.

But some things never change for as the darkness crept across the lawns and the birds settled into another long night I heard the timeless call of a tawny owl, quartering the fields in search of its supper. I thought how Miss Mitchell or Sir Hugh Paterson back in the day or possibly even Bonnie Prince Charlie during ‘The ’45’  may have heard the same sound calling through the twilight and I realised that some things will never change. 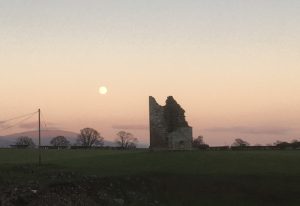 Join the birdwatch this weekend

Talking of birds – don’t miss the RSPB Big Birdwatch this weekend. It will only take an hour.

To receive the latest news from Bannockburn House, please fill out your details below.
← The Apiary in Winter February - Fair - Maids →
BOOK NOW
X
X