MARKING 60 YEARS SINCE THE MITCHELL AUCTION

This month saw the 60th anniversary of a major three day sale at Bannockburn House. The accumulated contents left in trust to Miss Annie Mitchell by her father, and probably some items left behind by the Wilson family of local tartan manufacturing fame, were put up for sale.

Bannockburn House Trust is fortunate to have a copy of the auctioneer’s catalogue listing all the items in the House in October 1960. That same month also saw the departure of Bannockburn House’s last full time resident, as Miss Mitchell moved to a new home in Stirling. The House itself was then sold at auction to the Glasgow eccentric millionaire A E Pickard. Following his death just two years later, the decline and neglect of Bannockburn House and its gardens began.

KEY TO THE CITY 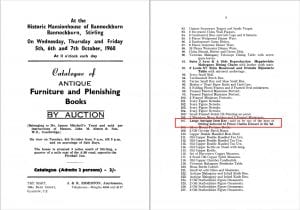 One of the most significant items sold on day one of the auction was a key to the gates of Stirling, which was presented to HRH Charles Edward Stewart (Bonnie Prince Charlie) at Bannockburn House to formalise the surrender of the town and end the siege in January 1746. Stirling Castle however did not surrender and was not taken.

Bonnie Prince Charlie had used Bannockburn House as his HQ for the siege of Stirling and the successful Battle of Falkirk Muir. It was also here that his relationship with Clementina Walkinshaw, the niece of Sir Hugh Paterson 3rd, began. Sir Hugh was a staunch Jacobite and he lost his baronetcy due to his support of the 1715 rising.

One factor that we are trying to puzzle out is what was sold and what, if anything, was unsold and still in the House when it was acquired by the community trust. 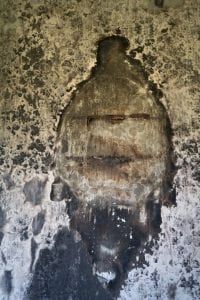 In part of the extension of the House in 1884 by Col. Wilson a pair of fine gilt mirrors is listed in the catalogue. We believe that one did not sell and was still on the wall during the fateful fire in 1972. The shape of the burnt outline matches the description of auction item 387. What is even more critical is that the mirror glass protected the underside and reveals a fragment of wallpaper that enables us to imagine how the room once looked. It is hoped that even if the pattern cannot be tracked down, then at least it can be reproduced if and when sufficient funds are raised to restore this grand Victorian drawing room.

One of the aims of the History Group is trying to trace some of these items listed in the catalogue. If we can’t source originals or copies then we will try and acquire similar items.

So if you have a spare Victorian Kirkman Grand Piano in a figured walnut case that you no longer need then we would love to re-home it for you in our drawing room!

If you don’t have that particular piano but instead have time, a skill, an interest or a desire to help Bannockburn House Trust bring this wonderful mansion back to life then we’d love to hear from you. Please contact Amanda on [email protected]

To receive the latest news from Bannockburn House, please fill out your details below.
← AUTUMN COLOURS "TO EVERY THING THERE IS A SEASON" →
BOOK NOW
X
X