There’s still much beauty to be found in the October garden, as Bannockburn House gardener Margaret Pollock explains:

Autumn is underway and shades of yellow, orange and red are claimed for this season’s colours.

The pastel shades of the summer roses and the deep blues of the lavender spikes have all but vanished, but I was struck by three intensely bright orange flowers that are still blooming. 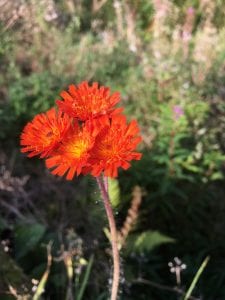 The Orange Hawkweed is a striking wildflower. In its everyday yellow version, it is easily confused with a dandelion (to which it is related) and so attracts little attention; but in its ‘Sunday Best’ attire, the vibrant orange petals lift the entire plant into a whole new realm of interest. Who could resist a plant called the ‘Fox and Cubs’? The ‘cubs’ being the many buds hiding beneath the blooming flower waiting to take its place.

Originally a native European flower, the hawkweed (Pilosella aurantiaca) spread to Britain in the the 17th century. It also happens to be one of the ‘perfect pollinators’ endorsed by the RHS for growing in a meadow or wildflower garden. But plant wisely! Like its dandelion cousin, it will seed on little wind-blown parachutes and could turn up anywhere in your, or your neighbour’s prize lawn!

The Marigolds (Calendula officinalis) growing in our polytunnels have been prolific this year. The origin of this popular plant dates back thousands of years to the Romans. Culpepper, the 17th century herbalist, would have used it frequently for its many beneficial medicinal uses.

We grow it alongside tomatoes as a companion plant. Traditionally certain plants, when grown together, improve each other’s health and yields. Some plants attract beneficial insects to improve fertilisation or can attract pests and save the crop from becoming infested. By growing them as companions to the main plants, they help to ensure a healthier crop.

Marigolds are easy to grow and their daisy-like flowers are also fantastic for pollinators.

The golden petals are edible and can be added to salads or used to make tea, and, unsurprisingly, they create a beautiful yellow dye. This particular flower looks like the starburst from a firework and I would challenge any artist to capture the delicate shading accurately. 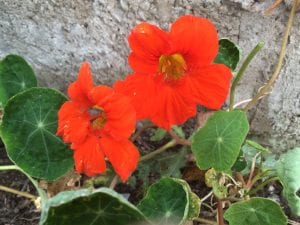 The Nasturtium is my third flower. An annual plant with round, fleshy leaves and large, funnel-shaped flowers which explode into bright tropical shades of red, yellow and orange. It’s easy to grow from seed and flowers until the first frost, but as we had our first proper frost a few days ago, there may not be many still blooming.

The nasturtium plant produces a mustard-like oil in its leaves which sap-sucking insects love, so it is another good plant to grow alongside your precious crops as a distraction.

If you add the edible flowers and leaves to a salad you’ll notice a zesty, peppery flavour a bit like watercress to which it is related and it’s really rich in vitamin C, so it’s good for you as well. The plant originates in South America and travelled via Spain to Britain, arriving in 1597.

The Latin name, Tropaeolum, means ‘nose-twister’ and another common name is ‘Tom Thumb’. I know which name I’d prefer to be called!

To receive the latest news from Bannockburn House, please fill out your details below.
← FUNDING BOOST FOR COMMUNITY LARDER MARKING 60 YEARS SINCE THE MITCHELL AUCTION →
BOOK NOW
X
X