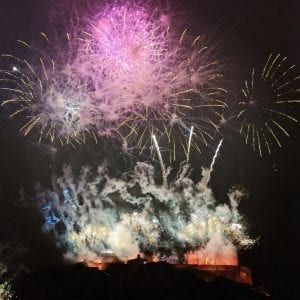 Who remembers when Hogmanay involved “First Footing” and all the preparations done before that First Foot could be welcomed in? Nowadays this tradition has been largely forgotten. In place of the old traditions, gala dinners in hotels and street parties are the norm. Or watching the fireworks and celebrations from around the world on TV from the comfort of your sofa.

I well remember the house being “red” out, cleaned from top to bottom, windows shining. All in order to welcome in the coming New Year at the “Bells”. The last thing to be done was taking out the ashes of the fire.

You hoped your First Foot would be tall, dark and handsome and he would give you a lump of coal, some shortbread and of course bring a bottle. This was all considered good luck.  Of course, after the obligatory “Happy New Year” greetings (and kisses) a wee dram was given to warm up the visitor. Afterwards you had to have a dram from the visitors’ bottle. If you were lucky you would get plied with hot sausage rolls, soup and maybe Black Bun or Madeira cake before heading off to First Foot another neighbour or relative. Ohhh the late nights and early mornings that were had! And who could forget the steak pie dinner to soak up the excesses of the night before.

The traditions of Hogmanay go way back in the mists of time, some stemming from old Pagan times and the Mid Winter festival.  The “Redding” out of your home was to clear out the remains of the old year and bring in the fresh new one.  Out with the old and in with the new. Old superstitions surrounded the giving of salt (to cleanse the house and protect from evil spirits) as well as burning Juniper branches and smoking the rooms to banish spirits.

Clearing the fires ashes out to set a new one for midnight. The First footer’s gifts were all symbolic of Health, wealth, good luck and prosperity for the household.  Maybe where the saying “Lang may yer Lum reek” came from! Something to keep your fires burning for the year, something to eat and drink, keeping your larder full. As for the First Footer himself, some say it’s thought that the tall, dark and handsome goes back to the times of the Vikings. The presence of the fair or red head was unlucky as it was likely a Viking raider on your threshold! Who knew eh!

Hogmanay was more a Scottish celebration than elsewhere. Have you ever wondered why? Here’s the reason. It started with the Puritans when Oliver Cromwell banned Christmas celebrations in 1647. After 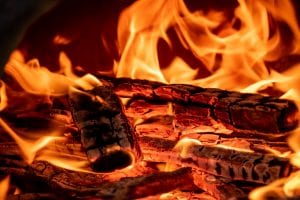 the Restoration of the Crown in1660 this was lifted, however the Presbyterian Church in Scotland discouraged it. Christmas was still a working day here in Scotland. It was 1958 before it became a Public holiday.

To receive the latest news from Bannockburn House, please fill out your details below.
← IT MAY FEEL LIKE WINTER, BUT IT'S TIME TO PLAN FOR SPRING THE WINTER GARDEN →
BOOK NOW
X
X