IT MAY FEEL LIKE WINTER, BUT IT’S TIME TO PLAN FOR SPRING

As Christmas fast approaches, we caught up with Margaret Pollock in the garden:

“December is passing rapidly with ever shortening days while, weather permitting, we try to get our work done before the Christmas break calls for tools down.” 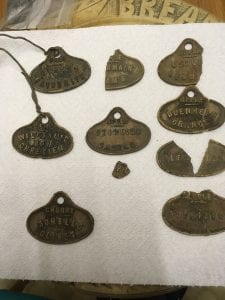 “We are making preparations for planting the orchard which will be in the East Field, near our polytunnels. 80 trees, mostly apple, are to be planted before March on land that grew grass ‘as high as an elephant’s eye’ during the long summer. There is no indication on any maps that there has ever been an orchard in this part of the grounds, but when metal detecting last year, and more recently, we have unearthed several, buried apple and pear tree labels (see photo). So, this land historically grew an orchard possibly pre-1896 and it feels good to be restoring it to a fruitful use again.

“It’s time consuming work calculating where each tree will be planted, how many trees we can fit in each row and, most importantly, what varieties will be planted. We’ve chosen a mix of old Scottish trees (Stirling Castle, Cambusnethan Pippin), some modern varieties and some favourites (Discovery and Katya). We’ll also be planting some Bramley’s Seedling, the well known cooking apple.

The Bramley apple tree was first grown in 1809, in Nottinghamshire, when some pips planted by Mary Ann Brailsford grew into an unusual large tree with big, sour apples. The sourness is caused by a high acid content which makes the apple ideal for cooking.

Then, in 1846, local butcher, Matthew Bramley bought the garden where the tree was growing and commercialised the fruit, giving the apple his name. That same tree is still alive today, 211 years later. You can read more about it here.  Why not try planting some pips of your own who knows what marvellous new variety you could produce! 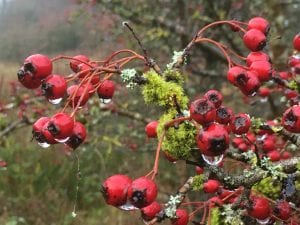 “I love the fact that although our land is bounded by roads on our two main borders, we have a rich, diverse wildlife living in and around the House. Regular blog readers will be well acquainted with our ever-present geese that are regularly ‘mentioned in dispatches’ as they assemble beside or in the middle of the ‘Doocot Loch’. There are several species of birds currently living off our hawthorn and holly berries and last week a rash of fieldfares passed through stripping the berries as efficiently as a swarm of locusts, despite the protests of our resident mistle thrushes to whom the berries really belonged.”

“With this colder weather we mustn’t forget Susie the cat, who has been busy helping us around the garden and sleeping. Yesterday, she took charge of a leaf raking session and I managed to get a quick snap of her issuing her commands from on high. One to be obeyed, I think you’ll agree!” 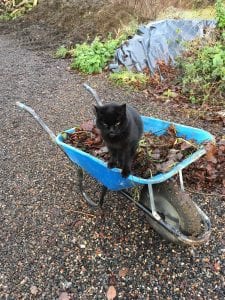