‘Summertime and the livin’ is easy…’

July 27, 2020
← ‘June is bustin’ out all over…’ COMMUNITY PROJECT GROWS WITH APPOINTMENT OF HEAD GARDENER →

It’s July and finally time to slow down and enjoy your garden, according to green-fingered volunteer Margaret Pollock:

The well-tended vegetable garden in July is an amazing sight. Gone is the frenzy of June and the early Summer months when there is a constant race to ‘get the plants into the ground’. Now there is time to linger over the swelling peapods, the perfectly formed miniature apples and the rich abundance of leaves and plants growing in their neat rows. A reward for all the earlier hard work – the sowing, the weeding, the hoeing, the watering and now, the picking.

There is satisfaction from going into the garden each day and returning with a full trug of vegetables and this is tinged with a sense of wonderment at the magic which is happening all around us as imperceptibly these vegetables and fruits change from day to day until suddenly they are ready to harvest and it seems we have done little to cause this change. 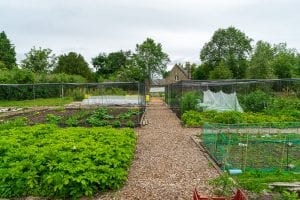 I have been picking fruit, gleaming jet black droplets of currant and luscious drupes of magenta raspberries, hanging from the laden branches straining under the weight of the swollen berries. This is part of the allure of gardening. A bare stick in the winter garden can flourish and turn into a branch bejeweled with raspberries like Christmas-tree baubles and then it is gone.

Recently, I was looking up different uses for berries and came upon this information. Cranberries, cherries and raspberries are great for brown hair to give a richness to the colour and create ‘auburn’ hues. If you fancy trying out fruit as a colouring agent, mash the berries with a small amount of water and some apple cider vinegar, and apply to damp hair, leaving on for 15-20 minutes. Be sure and let us know how you get on and if you can provide a before and after photograph, that would be even better! 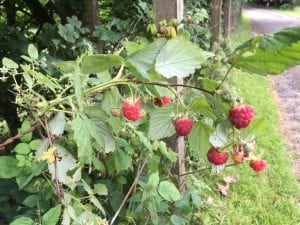 This spring we planted about twenty blackcurrant bushes of two modern varieties, ‘Ben Connan’ and ‘Big Ben’.  Although they flowered, I was not expecting any berries from them until a very energetic Blackbird leaping about underneath one of the shrubs caught my attention. On closer inspection, I discovered they were carrying generous bunches of some of the biggest berries I have ever seen.

There is much reason to preserve old bushes and heritage varieties for flavour and tradition, but blackcurrants have become unwitting victims of climate change. These berries need a specific period of winter chill to enable production of a healthy crop of berries in the following Summer. This is called ‘vernalisation’.  The plant can require sometimes as much as 50 days of winter temperatures between -2C and 12C so that the flower buds are produced. A mild winter can prevent this from happening and the resultant crop can be much reduced as a result.

If you have a few bushes in your garden this might not make much of a difference to your harvest, but we are talking about 10,000 tonnes of blackcurrants being the annual harvest in Britain – a £10 million pound food crop. Fortunately, the James Hutton Institute, a world leading research station in Aberdeenshire, has spent 20 years creating new varieties and now accounts for half of the blackcurrants grown in the world.

Hutton varieties are instantly recognisable as they are all named after Scottish mountains and have the “Ben” prefix. Their most recent variety, ‘Ben Lawers’ is being harvested for the first time this year and will be turned into ‘Ribena’ (other varieties of blackcurrant juice are available). Whilst this is all cutting-edge science, you can drink your juice knowing that they do not net their crops and freely allow the birds their share of the berries. Across the 35 participating farms that has amounted to 70 species and a total of 4,500 birds – and some of those will definitely have been leaping Blackbirds!

Here is a photograph of our varieties as the size difference is quite astonishing. The top fruit is ‘Big Ben’, the middle is ‘Ben Connan’ and the bottom one is an unknown, pre-existing bush already growing in the garden which we have kept because it carries a heavy crop.

Nature is ever present up at the house and this Spring seems to have been especially fertile.  There is a veritable nursery in the woodlands and fields of Bannockburn House. There are wren chicks ‘churring’, baby goldfinches twittering everywhere and our resident buzzards are currently teaching their chick how to glide on the thermals.  Apparently, this is difficult. First, Dad shows how it is done and effortlessly spirals up into the clear blue sky. Then Mum, encouragingly, follows suit only not so high and on a wider, slower circle, calling out to Baby who perches, seemingly paralysed on the treetop. Realising it is left behind and there is no way out, it takes flight. There are brief moments of gliding followed by frantic wing flapping, vocalising and a dramatic loss of height before it recovers some equilibrium and it starts all over again, and again, and again. Then, somehow, it works and the three birds slowly disappear on invisible thermals, another one safely fledged.

Normally, in summer, the deer vanish from our grounds and head up into the hills around Loch Coulter only to return in November. This year they have stayed around since Autumn most likely emboldened by the absence of humans. Those of us working in the gardens have seen them almost daily and on two occasions I have been privileged to see the newborn fawns. 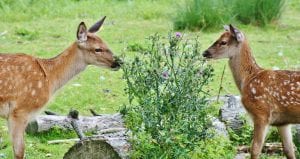 The first time, I was wading through knee-high grass on my way to water the recently planted shelter belt when a tiny young fawn leapt up from the grass, approximately 2 steps away, russet brown and spotted – just like ‘Bambi’ – it landed on spindly little legs and with another two elegant leaps had put a huge distance between us. Then it spied Mum. With a few more balletic leaps and a quick dash it had disappeared to safety beside its mother – and was that another flash of russet brown? Did she have two babies? I couldn’t tell, but two mornings later as I drove through the front gate and turned down the slope, there she was, grazing the newly mown grass, with two beautiful little babies darting in and out of the longer grass, playing, just like any children do. I stopped the car and for almost a minute was held spellbound by the sight until, suddenly, she looked up, they were gone and I could breathe again.

Summer passes all too quickly. As I write this, our first aubergine flowers are blooming in the polytunnels, the cabbages are ready for picking and the first potatoes are about to be plucked from the soil any day. The year is turning and whilst there is time to rest, look around and really appreciate the summer garden. I can already hear the call of autumn. The nights are a little longer and cooler, the berries are sweet but fleeting visitors, the birds have moulted and their song is quieter now. Soon the combine harvesters will be cutting the barley and the oats, and the school year will start up again. What will be your memory of Summer 2020?  It’s not too late to get out there and create a special outing or a memorable event. Go to the beach, climb an unknown hill, run barefoot through some garden sprinklers, you never know what you might see or do.

But if you just want to relax at home in the warmest month of the year then console yourself with the knowledge that July is National Ice Cream Month and treat yourself to some delicious frozen treats. What better way is there to spend a sunny afternoon, apart from gardening! 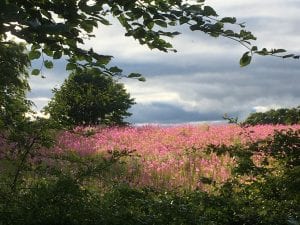 To receive the latest news from Bannockburn House, please fill out your details below.
← ‘June is bustin’ out all over…’ COMMUNITY PROJECT GROWS WITH APPOINTMENT OF HEAD GARDENER →
BOOK NOW
X
X