Ambitious plans to develop the grounds of Bannockburn House have been given a boost with the appointment of horticultural guru Kate White as Head Gardener.

Kate has over a decade of experience restoring and developing historic and botanic gardens, including time with the Royal Botanic Garden in Edinburgh and the award-winning Japanese Garden at Cowden in Dollar.

With 4 acres of food production also planned for the historic Bannockburn estate, the project will also benefit from Kate’s agricultural know how.

Kate said: “My previous career was in organic agriculture and I’m really looking forward to getting back to growing. Although I’ve worked in public historic and botanic gardens in Scotland for the last ten years, this is the first time I have been involved in a project so heavily embedded in the local community. I’m tremendously impressed with the volume of work and progress that has been achieved so far by our dedicated gardening volunteers. They’ve put in a huge amount of time, work and effort to restore, conserve and develop the gardens over the past four years.”

She added: “The gardens are well on their way to becoming a fantastic space for the community and visitors. Lockdown may have suspended our house tours, but the team have been busy behind the scenes growing fruit and veg for the community larder, as well as distributing tattie growing bags and tomato plants to the local community.”

Proposals for the 25-acre estate include reinstating the formal, ornamental garden to the south of the house and creating recreational spaces such as a children’s adventure playpark for the community and visitors to enjoy. More information can be found in the Bannockburn House Masterplan on www.bannockburnhouse.scot.

LINKS TO THE PAST 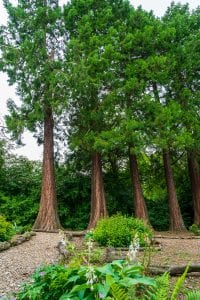 “In 1860, a young boy from Bannockburn started working at Bannockburn House as an apprentice gardener. His name was John McLaren. John obviously had found his forte as he went on to train as a professional gardener at the Royal Botanic Garden in Edinburgh.  While working here he met his wife and they decided to emigrate to the USA. This is where he became famous for creating the Golden Gate Park in San Francisco and planting over 2 million trees in his lifetime.

“When the Bannockburn House gardening team were clearing bushes and overgrowth in the garden in the early days, we revealed five ‘Giant Redwoods’ near the entrance to the gardens and property. They were lovingly referred to as “The Five Sisters” and were pretty much invisible from the road, which is quite amazing given their size and distinctiveness. These redwoods originate from sunny California! We believe these trees were planted in the 1880’s when there were many changes going on at the house and in the gardens. This dates them at about 150 years old. It’s possible that there could be a connection between John and the ‘The Five Sisters’ as he was fond of this tree. Perhaps he sent over the seeds?”

To receive the latest news from Bannockburn House, please fill out your details below.
← 'Summertime and the livin' is easy...' FUNDING BOOST FOR BONNIE PRINCE GARDENS →
X
X