Spring: a time of hope and renewal

Here’s Margaret Pollock with the latest update from our gardens:

So the clocks have sprung forward, the equinox is behind us and summer lies ahead.

The bees are beginning to fly out and about and spring is definitely on its way. This is such an invigorating time of the year as the daylight increases and temperatures slowly creep up, enticing us out into parks and gardens where the first flowers are bravely peeping through. 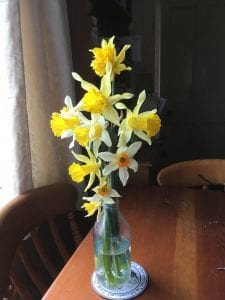 Our first daffodil flowered on March 1st this year, perfectly on cue for St. David’s day, with the zingy yellow colour beaming like a spotlight against the drab colours of late winter.

Now there are spring flowers in almost every garden and park and the unstoppable force that is spring is well under way.

Here is a picture showing some of the varieties that are currently flowering at the house – they were broken off by the strong winds last weekend and make a pretty picture.

March 31st, 2021 marks the end of our involvement in the Climate Challenge project which was funded by the Scottish Government for two years and successfully helped us restore the kitchen garden at Bannockburn House.

It has been hard but rewarding work removing the detritus of fifty years neglect and allowing this wonderful, sheltered garden to flourish again. The tasty vegetables have been a delicious bonus!

We hope to continue with some of the Community projects that were so successful last year.  If you missed out on the ‘tatties-in-a bag’ scheme last year then you will be pleased to hear that we are about to launch this year’s tattie growing challenge  – so stay alert and get your request in early to be sure of getting the necessary supplies. 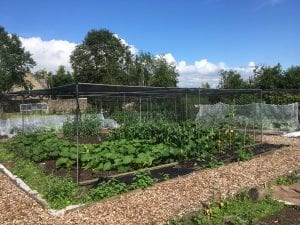 On April 1st 2018, Easter Sunday, we planted a tree to commemorate the 100th anniversary of the death of Lt. Col James Thomson Rankin Mitchell, DSO, who died on April 1st, 1918 from wounds sustained in battle.

He was undoubtedly an exceptional man and how different things might have been at Bannockburn House had he, or his brother David, survived the conflict.

In common with most families, the news must have been devastating but life goes on and ten years later Annie, or Miss Mitchell as she was

This picture shows Annie in her beloved garden, surrounded by the daffodils for which the house was well known.