To mark Women’s History month, history volunteer Anne Monaghan shares the stories of three women who worked at Bannockburn House in the first part of the 20th century: 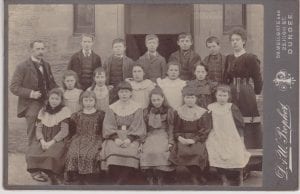 Young Mary is 2nd from the right in the front row in this school photo. Photo courtesy of Sheila Brown.

Mary was a table maid at Bannockburn House in 1911 and ‘lived in’. Born in Guildtown, Perthshire in 1883, she was the youngest of a large family.

It was commonplace in these times for young girls to leave home to work in service. Being a domestic servant was viewed as suitable preparation for a young woman in household duties. Learning to cook, clean and maintain her own future household.

The wages were less than in the factories or the mills, however board and lodging were provided. This eased the financial burden on families as it was common to send wages home to help out. Domestic service was the main occupation for young women from 1851 to 1911.

Mary would have left school at around 13 or 14 and she worked in various houses, including in Ireland before returning to Scotland in the 1900’s. We’re not quite sure how long she spent working at Bannockburn House, however family records tell us she left in 1914 to be married.

Here are some of the typical chores that Mary would have undertaken: 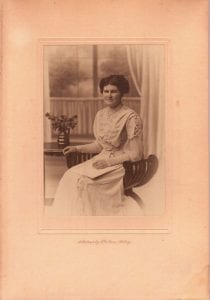 Mary as a young woman. Photo courtesy of Sheila Brown.

It would have been a long and busy day with very little time off. Possibly, only the afternoon off after church on a Sunday. Times were changing though and workers’ conditions were improving. The wages were lower than in factory work as board and lodging were included. Mary’s wages may have been around £28 per annum, based on the average rates from 1910. In today’s terms around £3,300.

Mary married Hugh Burns McIntosh at Logie in 1914. Hugh was a photographer at Ramsay’s studio in Bridge of Allan. The young couple set up home in Blairforkie Drive. All their children were born and brought up there at Salisbury Cottage. Their last surviving child Mary is 102 years old.

Family info tells us that Jeanie worked as a house maid at Bannockburn House sometime in the 1910’s. She may well have worked alongside Mary or taken over her job when she left to marry in 1914.

Jeanie hailed from Alva and doesn’t appear to be “living in” according to the 1911 census. Therefore we can’t say for certain what dates she did work at the house. It may be that she started after that year or that she lodged nearby in Bannockburn. It’s improbable that she could have travelled daily from Alva.

The next official mention of her is at age 23, when she married John Paterson Forsyth a farmer of Muiralehouse, Bannockburn in 1917. They were wed in Alva. At the time of their marriage Jeanie’s occupation was noted as, mill worker and John a coal miner. The higher wages must have lured her away from domestic service and her husband from farming. Coal mining was a prominent occupation in the Bannockburn area at that time. Muiralehouse where John lived, is very near to the original entrance to Bannockburn House (behind Corbiewood).

Perhaps love was kindled on the way past to work, or when young Jeanie was running errands.  The young couple began their married life at Muiralehouse, later moving down to Station Road in the 1930’s. Her prior domestic service would certainly have prepared her for family life, as they went on to have 11 children. Some of their descendants still live in Bannockburn. 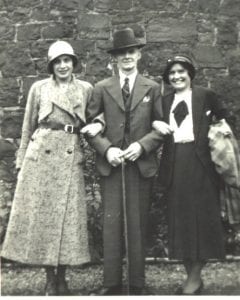 Bella is on the right in this family photo. What a smile!

She also worked as maid at Bannockburn House. Here, she met Jim Maclean her future husband.

He was one of the gardeners and love blossomed between them. This was in the later 20’s and 30’s.

Below is Bella and Jim’s wedding photo, courtesy of Maureen MacGregor.

The couple moved down south and were married there. 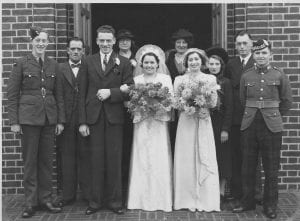 To receive the latest news from Bannockburn House, please fill out your details below.
← “If February give much snow, a fine summer it doth foreshow" Spring: a time of hope and renewal →
BOOK NOW
X
X