Our History Tours are back up and running and our volunteers’ research into the rich history of Bannockburn House continues apace, as volunteer Helen explains: 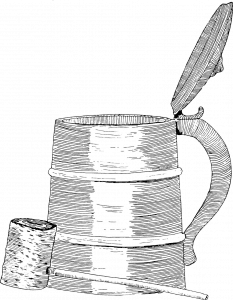 Pitcairlies Close was just off the High Street, near the Netherbow just above the Canongate. The building has now been demolished, but it was roughly opposite where the World’s End Pub is now.

Hugh also uncovered information about  Sir Hugh Paterson III. It turns out he was a patron of the Leighton Library in Dunblane; the oldest purpose built library in Scotland.The library is still there and open to the public. Sir Hugh was on a ‘watch list’, as he was suspected of being involved with the movement of swords to either Touch House or Bannockburn House after the ’45 Jacobite rebellion.

Another exciting find has been the gardener’s graffiti – which has been photographed and enhanced by Hugh. 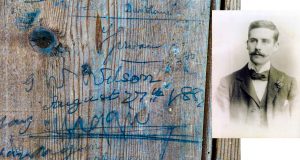 It is thought that it may have been a tradition for someone visiting the gardener’s shed to put their name on the back of the door.  Here are two examples from the Wilson era. 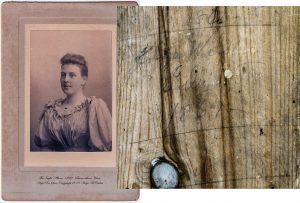 Meanwhile history volunteer Robert Denis has also been busy. He was alerted to the fact that a scrap of tartan from Flora Macdonald’s wedding dress has been found at the West Highland Museum.

Robert also found out that prints of Jacobite bank notes taken from the original plates have gone under the hammer at Lyon and Turnbull. These plates were ordered by Bonnie Prince Charlie and made by the engraver, Robert Strange. There is an unsubstantiated report that he was at Bannockburn House. The proceeds of the sale will go towards the West Highland Museum in Fort William.

Some of the History and Garden volunteers also recently took part in an Oral History workshop presented by Dr Gillian Murray from Glasgow Caledonian University.

When Covid allows the history group look forward to visiting GCU to do some much missed archive research. In the meantime they’ll continue to do as much online research as possible.  No matter how small, each piece of information adds to the fascinating story of Bannockburn House.