It has been six months since we started beekeeping at Bannockburn House and here’s Ilona Shilliday to report on our progress: 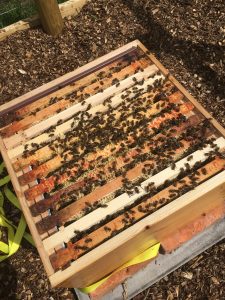 The end of the beekeeping year approaches and with it our first 6 months of beekeeping at Bannockburn House.

The honey crop has been harvested and the bees fed a nectar substitute to replenish the honey stores to see them through the winter months.

They are fortunate in this area to have late sources of nectar from Himalayan balsam, Ragwort and Ivy to add to the winter stores.  The entrances to the hives have been reduced as this helps prevent robbing by wasps and honey bees from other colonies.

Our 2 colonies headed by last year’s queens arrived on 2nd May. The poor start to spring had us concerned as the colonies, already small after winter losses, contracted even further but the glorious back end of spring and summer stimulated a nectar flow and with it an increase in egg laying by our 2 queens and nectar collection by the worker bees.

Both colonies created swarm cells and splitting of the colonies to prevent swarming has resulted in a total of 5 colonies – 3 headed by this year’s queens.  Judicious uniting of colonies may be required to ensure they are of a large enough size to survive the winter.

Our first virgin queen was almost certainly eaten by a bird on her mating flight, and with no eggs or young larvae with which to create a new queen, the colony was left hopelessly queenless.

Fortunately we soon had a newly mated queen in a smaller colony and the two were successfully united. Disappointments like this were turned into learning opportunities for our enthusiastic volunteers. 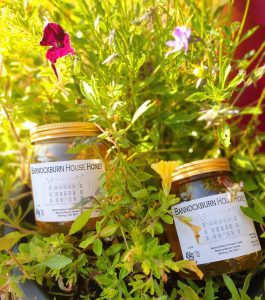 It’s been an interesting 6 months culminating in a much better than expected honey harvest and pride in seeing the first Bannockburn House Honey bottled in jars with our own unique label.

The honey is light in colour and we think mostly consists of nectar from the many lime trees in the grounds, as well as from the blackberries and rosebay willowherb which grow in abundance close by.

Now the bees are ‘working the balsam’. 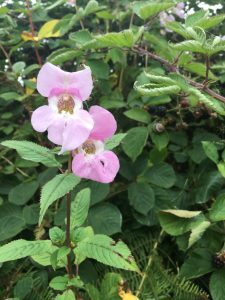 Himalayan balsam (Impatiens glandulifera), non native and highly invasive, is hated by many for its adverse effects on biodiversity but loved by bees for the abundant late source of pollen and nectar it provides.

It’s obvious when the bees have been working a crop of Himalayan balsam – their pollen baskets are filled with off-white pollen and their plumose bodies are covered in pollen.

They clean this off but can’t reach the back of the thorax (mid section) leaving a characteristic white mark.  It’s such a good nectar source (has the highest sugar nectar production per flower than any other native European flower) that bees visit it in preference to native plants resulting in poor pollination of native plant species.

The honey bee enters the trumpet of the flower to drink nectar from the base of the flower and pollen drops from stamens and dusts the bees’ bodies white.  The honey produced has a light colour and a mild taste.

You may also see them on another much hated weed – ragwort (Senacio jacobaea). Known as ‘Stinking Willie’ in Scotland because of its strong smell, it is another valuable late source of pollen and nectar for bees.

The honey, however, has an offensive smell when first harvested and is unpalatable.  Apparently the unpleasant odour disappears after a few months when the honey granulates, but we will leave it for the bees!

To receive the latest news from Bannockburn House, please fill out your details below.
← SEEING THINGS FROM A DIFFERENT VANTAGE POINT SNIPPETS FROM HISTORY →
BOOK NOW
X
X