SEASON OF MISTS AND MELLOW FRUITFULNESS 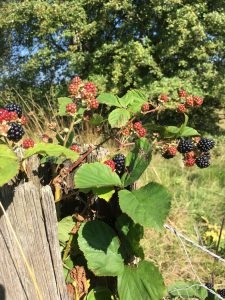 The recent morning mists and heavy overnight dewfall are a sure sign that we are in early autumn.

Farmers are bringing in their crops and as I was leaving Bannockburn House the other day, I noticed a branch laden with ripe brambles, dark and juicy, glistening in the bright, ripening sunshine. I picked the nearest, plumpest berry and was instantly flown back to summers past and warm days spent picking brambles from impossibly tangled stems among hedgerows and field edges.

As children we used to line a large basket with sheets of newspaper and head off to pick the berries but by the time the laden basket reached home, the paper was stained bright purple and usually our legs were as well. Then there was the juggling act with the jelly bag which was suspended overnight from a couple of chair legs to allow the precious juice to drip out of the cooked, mushy pulp into a bowl.

By morning this black elixir was waiting to be transformed into delicious Bramble Jelly and another gap in the winter larder was filled. Maybe I will try and make some this year.

We don’t seem to have many apples this year but we have been lucky with our ancient pear tree. 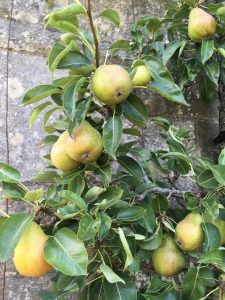 In 2017, when we took over the gardens, the tree was very weak and only carried three pears. Now after a few years of care and attention, some careful pruning and generous amounts of manure, the tree is thriving and this year has carried well over fifty pears – so many in fact that we had to remove half of them in case some of the branches broke under the weight.

There are some strong new shoots growing at the front of the tree and this winter we will be able to graft them onto fresh rootstocks and create new trees to preserve this particular variety – “Souvenir du Congres”.

Polytunnels get very hot in the sunshine and there have been several days recently when ours have reached an internal temperature exceeding 30 degrees Celsius.

Accordingly, we tend to avoid working in there at the hottest times.

Not so the visiting bees and other pollinating insects. They seem relatively unaffected and busy themselves going from flower to flower in 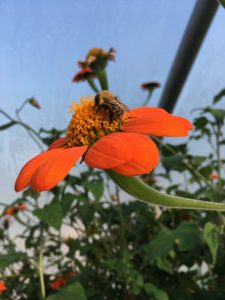 However, occasionally they do succumb to the heat – having feasted on pollen and nectar they get drowsy in the warm, still atmosphere and it’s not unusual for us to find huge bumble bees fast asleep in the middle of a flower, resting in this safe space we have created for them.

HEARD IT ON THE GRAPEVINE

We have been really lucky to obtain a cutting from the famous ‘Kippen Vine’.

This grapevine was planted in 1889 by Duncan Buchanan, a 31 year old gardener, who was setting up his own market garden and vineyard in nearby Kippen.

The vine, a French variety called ‘Gros Colman’ grew prolifically under his care becoming the largest vine in the world and by 1910 was producing over 600 bunches a year. Sadly, after two generations, there was no-one else to continue looking after the vine and it was cut down in 1964.

I remember my Grandfather telling me about this amazing, huge plant and how delicious the grapes had been and now we have one of our own.

We will do our bit to continue the legend of the ‘Kippen Vine’ and who knows, we might just have the perfect conditions to grow this venerable plant to giant proportions again, but we have to get it through this winter first!

To receive the latest news from Bannockburn House, please fill out your details below.
← YOUNGSTERS DIG DEEP INTO HOUSE’S HISTORY ARMY OF VOLUNTEERS TO HAVE PORTRAITS UNVEILED AT BATTLE HQ →
X
X