Well if there is one thing that has been loving all this wet weather, it’s the Bannockburn House garden as Margaret Pollock explains: 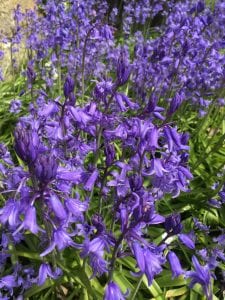 May is named after the Roman goddess of Springtime, Maia. To be outdoors in May is to witness a transformation. Each day is full of birdsong from first light till sunset. Swallows swoop and flash past hunting unseen insects, barren flower beds begin to sprout,  blossom-covered trees produce acid-green leaves casting shadows again and bluebells flourish creating smoky clouds of richly perfumed flowers. Nature is in full flow.

Our pear trees were absolutely smothered in blossom this year and it looks like a good harvest may result as several young fruits are now fattening nicely. The apple trees are late blooming, so it’s too early to tell yet; but another plant doing really well is our rhubarb.

Juicy rhubarb stems cooked with some ginger and a crumble topping make a delicious pudding. However, it is only since the eighteenth century and the arrival of sugar on these shores that we have eaten the tart stems. Prior to that, the root of the rhubarb plant was grown for medicinal uses. The leaves are never eaten as they are poisonous. 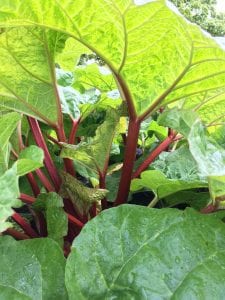 The name rhubarb comes from the Greek – Rha barbaron.  ‘Rha’ refers to the River Volga in Russia, the longest river in Europe, which at one time separated the ‘civilised western world’ from the eastern lands of the barbarians or ‘barbaron’  and this strange plant grew wild on the banks of the Volga.

Rhubarb originally grew in the cold climate of Siberia, Mongolia and the Himalayas where it was used for thousands of years as a medicine. In the 1700’s Russia obtained a supply of rhubarb from North East China and had a monopoly over its export and price, making a fortune by trading the dried root from St. Petersburg, across the Baltic Sea to Europe. They banned the sale of rhubarb seed to prevent the vegetable from being grown elsewhere. So how did rhubarb reach Scotland?

Dr. James Mounsey, (1710-1773) from Dumfries, was Surgeon to Catherine, Empress of Russia. Following the suspicious death of her husband, Peter the Great, in 1762, Dr. Mounsey, fearing for his life and safety left her service and returned to Scotland bringing with him his wealth and a several pounds of smuggled rhubarb seed. This audacious act endangered his life and for his remaining years he slept with a loaded firearm by his bedside. 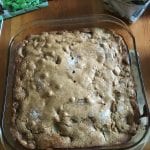 Perhaps we should rename it ‘Dr. Mounsey’s Fancy’ ?