If you are lucky enough, as we are, to have a long-established grassland meadow which is not being heavily grazed, you will by now be able to see lots of Pignut flowers flexing in the gentle breeze and creating a white, almost misty haze over the field. Pignut’s latin name is ‘Conopodium majus’. 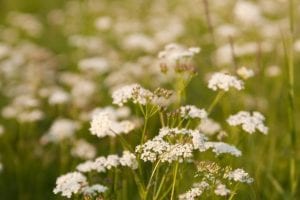 Pignut flowers are small, white and pretty. They grow in little clusters at the end of a slender graceful stem, which (unusually) gets thinner as it gets closer to the ground. Then this is where the magic occurs. If you are able to follow this delicate, white stem into the soil and carefully dig down about 4 inches, you might be fortunate to find a grubby, knobbly bump on the end of it growing at right angles to the narrow stem.

Gather it up, brush off the soil and you will see the burnished copper skin of a pignut, a bit like a chestnut in colour. If you peel off this shiny skin, you will then be holding a pure white tuber. This is the actual source of the plant and is considered quite a delicacy. It is crunchy, tastes a bit like a hazelnut crossed with celery and is quite delicious.

Not surprisingly, pigs find them delicious as well, and if you have pigs in your fields, they will almost certainly find the pignuts before you do! Be careful not to confuse it with anything else. It can look a bit like a bluebell bulb which is poisonous, and the flowers are easily confused with other white wildflowers at this time of year, some of which are also poisonous.

Whilst you have been walking through your sunlit meadow, admiring the pignut flowers, you might have noticed a small dark ‘butterfly’ skittering around the flowers. This is a sun-loving, day-flying moth, the “Chimney Sweeper”, ‘Odezia atrata’, so called for its sooty black wings. If you look closely, you’ll see that the wings have a very narrow white edge at the sides. ‘Chimney Sweepers’ at all stages of their life feed only on the pignut plant.  As soon as you know this, it makes seeing the butterflies extra special. Pignuts and Chimney Sweepers has a nice ring to it. 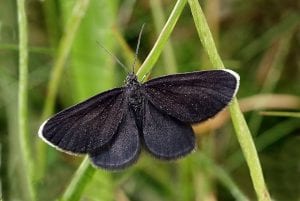 Another thing we have discovered in excess is the Euonymous Caterpillar. This clever insect lives on one species of tree and when the moth finds this tree, it makes full use of the unfortunate victim and covers it with eggs. These survive throughout the winter to hatch out now – especially after a dry hot spell into a total web of thousands of caterpillars which are weaving a silken tent which now entirely covers our Euonymous or Spindle tree.

Inside this tent, the caterpillars are safe from predators and adverse weather and they can feast all they want until they are ready for the next phase of their lives as they metamorphose from caterpillars to flying moths. They will drop to the ground on long silken threads and pupate for a few weeks, then fly away and lay their eggs on another Euonymous tree (hopefully) and ours should be able to recover.

Everything happens SO quickly at this time of the year. Midsummer has just passed yet if you look closely, many trees and shrubs have already formed their fruit and seeds for this Autumn. There are small apples, plums and pears swelling on the bough; cherry trees have dropped a lot of their crop and you will find pavements and paths covered in perfectly formed, tiny cherries that the tree has shed because of drought, high winds or too much crop.

Blackcurrants and gooseberries have almost ripened, sycamore whirligigs are already dropping and last week, whilst we worked in the garden, there was a constant ‘snowfall’ of papery seeds from a nearby Wych Elm tree. They look like oval, papery discs with a central brown blob of a seed and they float over long distances on the breeze.

Trees that rely on the wind to disperse their seeds create a massive quantity of these seeds in a variety of shapes and forms, specifically designed to float and ride on the winds and currents that will take them to another fertile area and allow them to spread across a region. Willow trees have hairy, white seeds like overgrown dandelion tufts which were floating around about the end of May coating the ground in an untidy mess of catkins and white fluff.

The scales of pine cones open up in dry weather and they release hundreds of papery seeds onto the breeze to be spread over a wide area and help create a new forest. In fact, if you have a pine or fir cone at home, it will often act as a barometer opening up if the weather will be dry and fair and closing tightly if rain is due.

Our wildflower survey is in full swing now and we have discovered some interesting plants – bulbous buttercups and yellow rattle, sanicle and early purple orchids and there will be more to come as we pass from June into July and August.  At the last count, there were 73 orchids flowering on the grassy slope beside the main entrance to the House.

I must apologise for skipping a verse of “The Months” poem last month. I jumped to June’s flowers and attributed them to May.  Read the whole poem here.  The poem was written by Sara Coleridge, the daughter of Samuel Taylor Coleridge, (1802 -1852) and I remember it (or thought I did) from Primary School. It is such a sweet poem.

Blog by Margaret from the volunteer gardening team.