August 3, 2021
← LOOKING TO THE FUTURE CREATIVE FUN FOR FAMILIES AT BANNOCKBURN HOUSE →

Wetter weather is on its way and it’s welcome news for the Bannockburn House gardening team, as Margaret Pollock explains:

At last the rain has come and the long, hot days of high Summer have gone – for the time being, hopefully!

This warmest period of the year is often referred to as the ‘dog days of summer’, a saying steeped in antiquity dating back to Ancient Greeks, Romans and beyond.

The phrase has nothing to do with our faithful pets for it has a connection to astronomy.

During the sultry days of July into early August, Sirius, the dog-star, is invisible due to its proximity to the sun. The Ancients believed that the combined daytime heat from the Sun and Sirius made these the hottest days of the year – the ‘dog days’.

They considered it to be an unlucky time as it could bring catastrophes such as extreme heat, sudden storms, flooding, drought or even fever.

It certainly sounds like things haven’t changed much over the millennia! 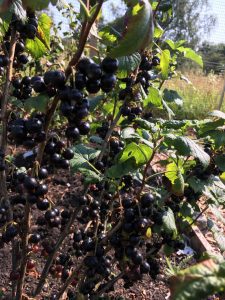 ‘Dog days’ or not, it’s the school holidays and that means berry-picking time.

Earlier this year, we moved all our soft fruit bushes into their permanent home in the ‘Triangle Field’, next to the Orchard.

Although exposed to the north and east winds, this is a very sunny part of the garden and as a result, they have grown well, producing a heavy crop.

The blackcurrants were first to ripen and it seems to have been the perfect year for them. A dry, sunny period when they were flowering ensured good fertilisation, then it was cooler and rained a fair bit which swelled the berries and finally, the generous sunshine has ripened them to a luscious, glistening harvest.

One variety in particular, ‘Ben Connan’, has given us a huge quantity of fruit.

It can be fiddly trying to pick blackcurrants but if the strigs  (clusters) of berries are equally ripe then they can be easily stripped from the bush using a fork.

Our polytunnels seem to have become a second home for many creatures. In the early morning there is often a wren or robin hunting for breakfast among the vegetables and there is a plethora of insects living inside, in the tropical climate. 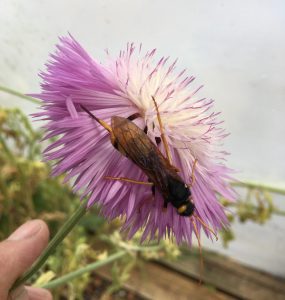 Bees, butterflies and moths are regular visitors, along with daddy long-legs and spiders galore. However, I was taken aback to discover a beautiful female wood-wasp entangled among some cornflowers a few days ago.

At first glance these insects look quite frightening as they are wasp-like and big! However, they do not sting and are harmless to humans.

The female has a long tube or ‘ovipositor’ protruding from her rear end which looks for all the world like a massive stinger, but she uses this tube to deposit her eggs deep inside some soft, decaying wood.

Once hatched, the larva feeds, unnoticed, for a year until it metamorphoses into a flying adult. As it exits the wood, it leaves a perfectly round hole about the width of a pencil, so whilst you will rarely know where it is, you will always know where it has been!

One plant that marks the turning of the season is ‘Fireweed’ or ‘Willowherb’ (Epilobium angustifolium) .

The gorgeous, purple-pink flowers first appear in July, quickly carpeting areas of disturbed ground with a rosy haze of flowers. As the days pass, the flowers appear to climb higher up the stem until, by late August, they can go no further.

By then, the narrow seed pods are bursting open, releasing up to 80,000 tiny cottony parachutes from each plant – one reason why it is such a successful weed.

I’m sure our bees will love it as a ready supply of pollen and nectar to add to their winter larder.

If you fancy trying some of its culinary delights for yourself, why not head to this website to learn more about this valuable plant!

Just remember, if you are gathering any wild plants to eat, always gather them from an area that is safe.

If there is any possibility that the plants, berries or fruits could have been contaminated, then do not pick them but move on to another source.

To receive the latest news from Bannockburn House, please fill out your details below.
← LOOKING TO THE FUTURE CREATIVE FUN FOR FAMILIES AT BANNOCKBURN HOUSE →
BOOK NOW
X
X