Twice this week we have had geese flying low across the orchard, so close that we can almost feel the ‘whoosh’ of air through their feathers as they pass by and even though it has been several months since we last heard them, their approaching sound is unmistakable.

These are not the huge skeins of hungry, arctic geese that arrive exhausted from their marathon

migration, they are, in fact, local Canada Geese that have spent the summer grazing on lush, grass pastures but they give us hope that some flocks have survived the dreadful bird flu that has devastated so many species this year and they leave us in no doubt that the Seasons are changing. Autumn is here and with it comes the harvest, damp mornings and shorter evenings. 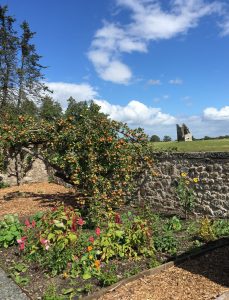 We have been lifting our potato crop – ‘Charlotte’ and ‘King Edward’s’ – and despite the lack of rain this Summer we are managing to lift a substantial weight of tatties. All the more amazing since we had to cut away all the green foliage last week as the damp weather brought us potato blight!

We have had a huge crop of cabbages and our pumpkins are going to be massive as well. I’m wondering if the fairies have been watering all the vegetable beds at night time but, more likely,  it is all down to the amazing location that the Ancients chose when creating our garden all those centuries ago.here is a picture of some of the produce we have sent to the local food bank. 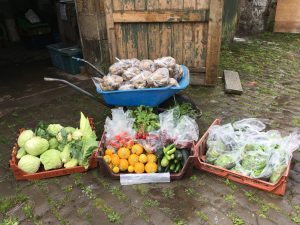 This has been a good summer for butterflies. We have had the usual Peacocks, Small Tortoiseshells and Cabbage White but we have also seen the burnished Small Copper, Red Admiral and one of the Fritillaries. I’m hoping to create a more diverse meadow next summer and if we include a few more specific host plants then perhaps we will provide conditions for some of the more threatened species to prosper. On a recent sunny day I was entranced to notice a ‘kaleidoscope of butterflies’ feeding on one of our flowering shrubs. I now know why it is called the ‘Butterfly bush’ . 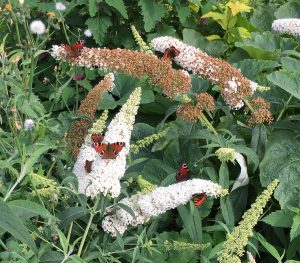 We have been particularly lucky with another of our ancient pear trees that we are regenerating. This tree is growing against the back wall of the house and has taken five years to produce a handful of fruit. This year it is laden – so much so that we had to tie up the branches to help the young limbs support the weight. Happily we have sufficient fruit now to have the tree identified ( a minimum of five pears is needed) and then we can set about grafting and preserving this old variety. We suspect it is an old Scottish variety called ‘Fair Maggie’ from Perthshire.

Sadly another old tree, literally on its last legs had produced 14 pears this summer but when I went to check on it a week ago the pears had vanished – probably some deer as the tips of the shoots have been grazed. We might be able to nurse it through for another year but I am not optimistic. Everything hinges of some cuttings that were taken in early summer by a forester friend – keep your fingers crossed. 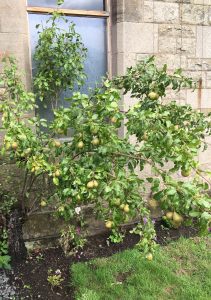