The Apiary In Spring

The unseasonably warm weather this weekend meant we were able to do an early spring check on the colonies at the apiary.

In three of the four hives the queens are laying well with an excellent early spring build up. Hopefully this will translate into a large foraging force by the time of the first main nectar flow and a bumper honey harvest. In the photograph the bee with the elongated abdomen and a white spot on her back is a queen. 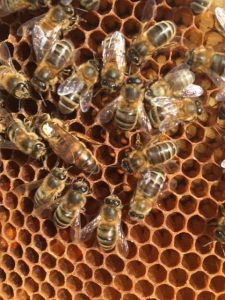 The 4th colony is very small and lucky to have survived the winter. We have moved it into a small hive called a nuc box. The queen may turn out to be fine but she will not lay many eggs until there are enough young adult bees to feed the developing larvae and so the colony will grow slowly.  We will help things along by transferring frames of emerging brood from stronger colonies once they are more established. (Brood is the name given to the bee developing from an egg to emerging as an adult).  If, despite plenty of nurse bees, she still doesn’t lay well the bees will replace her by a process called supersedure. 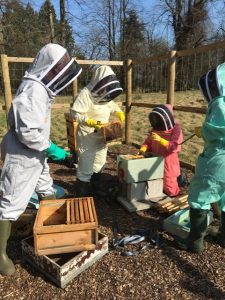 The capping on the brood can give an indication of disease.  This photo shows healthy brood with biscuit coloured capping in the centre of the frame where this queen started to lay. She then moves outwards laying eggs as she goes and if you zoom in you can see larva on the periphery of the capped cells. Further out still are eggs, although these are difficult to see in this photograph. 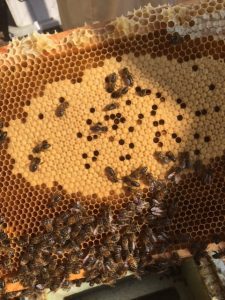 The workers are busy bringing in pollen and we saw three different colours of pollen loads.  The orange of gorse is unmistakable, as is the off white/ grey colour of hazel pollen but there was a paler yellow with a green tinge that we weren’t sure about.  It might be pear pollen if the pear tree in the grounds is in bloom.  Pear trees are among the first fruit trees to bloom each year but bees don’t find them hugely attractive as the nectar they produce has a very low sugar nectar content of only 8-10%.  Compare that to dandelions with a sugar nectar content of 73%! Maybe that’s why pear trees flower early – less competition for the pollinators. 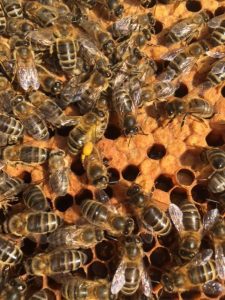 To receive the latest news from Bannockburn House, please fill out your details below.
← Spring is here Bloomin’ Marvellous! →
BOOK NOW
X
X