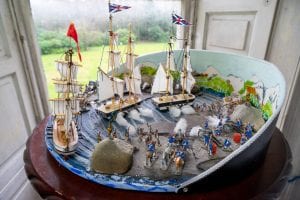 A diorama of the naval skirmishes on the Forth, which took place from 7th – 12th January 1746 between the Jacobite and Hanoverian forces. This fantastic model was created by volunteer Robert Denis. Photo by Hugh McCusker.

Nearly 2,000 people tuned into our Big Jacobite Afternoon Lecture on Facebook on Sunday.

The free virtual event, held on the 17th of January to coincide with the 275th anniversary of the Battle of Falkirk Muir, featured six local experts including Stirling Council archaeologist Dr Murray Cook.

Events Manager at Bannockburn House Ross Caldwell said: “January has seen us celebrate all things Jacobite. Bannockburn House was the battle headquarters of Bonnie Prince Charlie in January 1746. 2021 marks 275 years since those historic events and on Sunday we heard from local experts on a variety of topics – from the naval skirmishes on the Forth, to the blowing up of St Ninians clock tower. We look forward to building on the success of the event and hope to be able to welcome visitors back to the House later this year.”

Sunday’s series of talks can be watched again on the Bannockburn House Facebook page and will also be uploaded to the Trust’s You Tube Channel.

To receive the latest news from Bannockburn House, please fill out your details below.
← THE WINTER GARDEN PUTTING BANNOCKBURN AND THE EASTERN VILLAGES ON THE MAP →
BOOK NOW
X
X