Every Picture Tells A Story

Throughout the country our museums and galleries are full of paintings showing different aspects of life through the centuries. But how often do we look really closely at these paintings and wonder about the lives of those captured by the artist.

A volunteer at Bannockburn House has recently uncovered a connection between two paintings hanging in Summerlee Museum of Scottish Industrial life at Coatbridge and Bannockburn House, near Stirling. The paintings are entitled The Curlers at Rawyards and Rankin Family Portrait.

The Curlers at Rawyards was painted by Scottish artist John Levack in 1857. The painting captures a curling match taking place on a pond at Rawyards Estate on the outskirts of Airdrie. 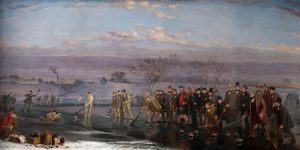 Two of the men featured are David Mitchell, a prominent Airdrie solicitor and banker and James Rankin, Provost of Airdrie and Justice of the Peace for Lanarkshire.   James Rankin is the man dressed in a kilt. An unusual choice of apparel for a winter’s day!  James also appears in the Rankin Family Portrait which was painted in 1853 also by John Levack. 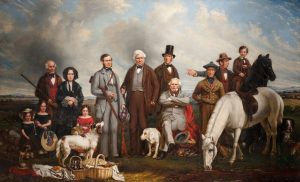 The painting shows the wealthy Rankin family having a picnic possibly on the Auchengray Estate which was owned by Patrick Rankin, James’s father. James wife Anne is standing to James’s left and in front of them are their three daughters Elizabeth 7, Margaret 5 and Anne 3.  Their son Patrick aged 9 is sitting on the pony to the right of the painting. When this painting was commissioned the family were living at Mavisbank House, New Monklands.  Their second son James was born at Mavisbank a few months after this scene was painted but sadly he died just 3 years later.  So what connects this portrait of a wealthy family in New Monklands to Bannockburn House? The answer is Anne Rankin, the little girl on the far left of the painting.

Almost 30 years after the family portrait was painted, Anne Rankin married James Mitchell, at the George Hotel, Glasgow, on the 18th April 1882. James was the eldest son of David Mitchell one of the curlers who is depicted in the Curlers at Rawyards.  James was 25 and had followed his father into banking and at the time of his marriage was living in the Bank of Scotland at Slamannan. Anne Rankin was 30 and she was living with her grand-father at Otter Estate, on Loch Fyne in Argyll.

We don’t know how Anne and James met but we do know that James Mitchell’s mother Mary, and Anne Rankin’s father James were cousins.  They were both brought up in the same town where their fathers were prominent businessmen and partners in the firm Rankin and Mitchell. It is highly likely that their families would have moved in the same social circles. Shortly after the Rankin Family Portrait was completed Anne and her family moved from Mavisbank House to Auchengray House and James Mitchell and his family moved into Mavisbank. When Anne was 8 years old her mother died in 1858 aged 30 and three years later her father James died aged 41. After the death of her parents Anne, her sisters Elizabeth and Margaret and her brother Patrick were brought up by her widowed grandfather Patrick Rankin at his home Otter House.

After their marriage Anne and James Mitchell lived at Auchengray House and their daughter Annie was born there on 30th January 1883. They had another son called James who died when only 3 weeks old. Two other children called David and James were also born at Auchengray. Sadly Auchengray House was badly damaged by fire in 1937 and is now a ruin.

James Mitchell bought Bannockburn House from the Wilson family in 1910. He was a Justice of the Peace for Stirling and also had extensive interests in coal mining and shares in companies worldwide. On 5th December 1923 James was chairing the Annual Shareholders meeting of James Nimmo & Company when he collapsed and died of a heart attack aged 68. The company were the owners of the Redding Pit near Falkirk where nine weeks earlier 40 miners were killed when water flooded the mine.

James Mitchell was a very wealthy man and left over £215,000 in his will.  His wife Anne died in 1928 and it was their daughter Annie who inherited Bannockburn House which was kept in trust for her lifetime. Her brother James was killed in the First World War and her other brother David died in Switzerland in 1921. Annie never married but spent most of her life carrying out charitable works in the local community.  She donated the Rankin Family Portrait and The Curlers at Rawyards to Airdrie Town Council in 1960 just before Bannockburn House was sold.  The remainder of the contents of the house were sold at auction over two days in October 1960.

The Mitchell’s occupied Bannockburn House for 50 years. More of their story can be read in the Our Families feature, where you can also see more on our other families.

For a more personal insight into the history of one of Scotland’s hidden gems, why not book a guided tour? Information on dates will be released soon, so keep an eye on this website or our Facebook page https://www.facebook.com/BannockburnHouse/ to learn more about it’s fascinating 400 year history.