THE BRUTALITY AND RUTHLESSNESS OF NATURE 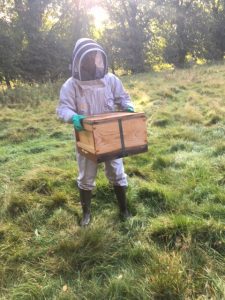 It’s now October and preparations for winter have been underway both inside and outside the hives.  Unfortunately one of our smaller colonies died of starvation. Despite reducing the entrance so that the bees could defend their honey stores, the colony was too weak and was robbed by wasps and stronger honey bees.

We were fortunate to receive a replacement colony of bees from Monument Apiaries and so head into the winter with 3 strong full size colonies and two smaller colonies that we are going to overwinter in a nuc box (essentially a small box about half the size of a normal hive) to help them survive. A small colony of bees is called a nucleus, hence the term nuc box. 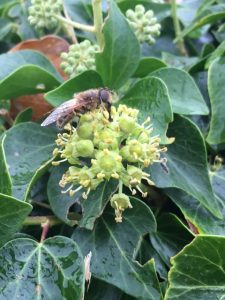 On mild days you will still see the bees flying and ‘working the ivy’ – the last source of pollen and nectar for the year. Ivy (Hedera helix) is one of the most common climbing plants in the British Isles and is plentiful in this area. Most nectar has a high water content which the bees have to evaporate off so that it can be stored as honey. This takes time and energy and this late in the season may not be possible to achieve, resulting in honey with a high water content that ferments and causes diarrhoea when eaten by the bees.

As if to compensate for its late flowering ivy produces highly concentrated nectar in copious amounts that may even drip off the flowers. If you look carefully at the photograph of the bee on the ivy you can see her proboscis (tongue) extended as she sucks nectar up into her honey stomach. The honey produced is strong flavoured, crystallises quickly and is best left for the bees to see them through the winter. The pollen (a source of protein) is a gorgeous, vibrant yellow colour and our bees have been going wild collecting it. 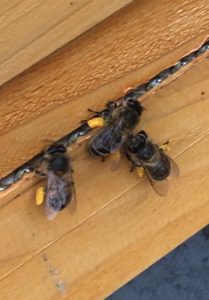 DRIVING THE MALES OUT

The drones (male) have been evicted and towards the end of September their dead bodies could be seen at the hive entrance. Their purpose is to mate with the Queen and as this is no longer required and they would consume valuable winter stores the workers (female) drive them out.

Propolis has been deposited by the bees to make the hives weather proof. Propolis is a sticky resinous substance from trees that bees collect and use in a variety of ways.

This includes sealing cracks and embalming intruders looking for a warm place to spend the winter. It has antibacterial properties that help prevent the mummified body from breaking down while it dehydrates. 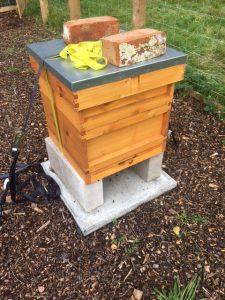 Polystyrene insulation has been placed under each hive roof and the hives have been strapped down in anticipation of the autumn and winter gales. Hopefully all five colonies will make it through the winter unscathed.