October 29, 2021
← THE BRUTALITY AND RUTHLESSNESS OF NATURE Christmas is Coming →

October will soon be over and the leaves on our deciduous trees are changing colour.

This is such a brief but special time. As the days shorten the trees don’t have enough sunlight to make food so they begin to shut down for the Winter. They break down the green chlorophyll pigment in their leaves and store reabsorbed nutrients in the trunk and roots. Other pigments then become visible such as carotenoids and xanthophylls creating orange and yellow leaves, generating much of the dramatic blaze of autumn colour. 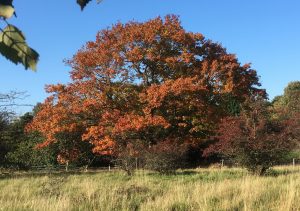 Despite the dry Summer we had earlier this year, the Autumn rain has helped to produce a bonanza in our fungi populations.

We have large piles of wood chips that are being used to make temporary paths around the gardens and each of these piles is, in fact, a fungi factory. As the wood chips begin to decompose the moist, dark environment becomes a home for fungus and you can see network of white fungal threads or mycelium develop inside the pile as the fungi help to break down the wood chip into nutritious organic matter which will enrich the soil. 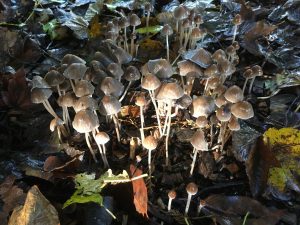 The existing wood chip paths are dotted about with little families of toadstools, some white, or cream or green and in the Woodland Walk the fungi have created impressive mini forests which look stunning as the light reflects from their glistening caps.

This weekend the clock goes back one hour from British Summer Time to Greenwich Mean Time.

For most people this means a welcome extra hour in bed on Sunday morning, but of course it also means that it will get darker an hour earlier at the other end of the day.

Did you know that the Royal Family once operated on ‘Sandringham Time’, half an hour ahead of GMT on a whim of King Edward Vll who loved to hunt.

Or perhaps you know someone who runs their life to ‘Oxford Time’ –  where everything takes place five minutes after GMT since the longitudinal position of Oxford  places it 5 minutes behind Greenwich where the standard meridian is situated.

Regardless of the solar time, it is Hallowe’en on Sunday evening, a time for ‘ghaists and bogles’ and ‘neep’ lanterns.

When I was young we carved turnips into lanterns – nothing like as easy as pumpkins – and we ‘dooked’ for apples in the old zinc bath, covered ourselves in old sheets with a belt around the middle and went off down the street carrying jam-jars on a string with a lit candle stub for a lantern as we went ‘guising’ around the neighbourhood trying to disguise ourselves from the wicked witches and evil spirits that stalk the land on Hallowe’en. 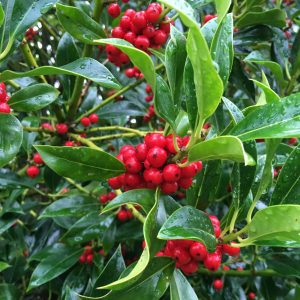 This year it will be dark extra early so make sure you are home safe and sound and if you are at all worried that a witch may have slipped into your house unnoticed, just make sure that you have a holly branch handy to tuck under her chair as one prick of her finger that draws blood will break her spells!

To receive the latest news from Bannockburn House, please fill out your details below.
← THE BRUTALITY AND RUTHLESSNESS OF NATURE Christmas is Coming →
BOOK NOW
X
X