It’s All About The Queen

It’s been a month of Queen cells at the apiary.

There are three types: swarm cells, supersedure cells and emergency queen cells.  Swarm cells occur when the colony becomes congested – the old queen and about 60% of the colony form a swarm and relocate in a new nest site, leaving behind swarm cells containing new queens and the remainder of the colony.   It’s a form of reproduction – two colonies are created from one.

We don’t want to lose our bees so at the first sight of queen cells we split the colony creating an artificial swarm with the queen and flying bees in one hive and the younger (not yet able to fly) bees in another with just one swarm cell to become a new queen.  If you leave more than one swarm cell there is a risk of one of the new virgin queens flying off with some of the colony in a smaller cast swarm. 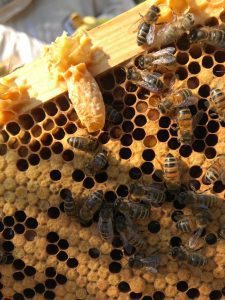 We obviously missed one and a cast swarm formed but fortunately it swarmed on a day we were there so we were able catch it. 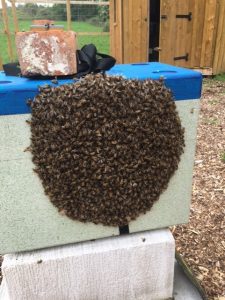 The virgin queen is now mated and laying well.  If you look carefully at the photograph you will see one of the cells has two eggs in it instead of one – she has just started to lay and not quite got the hang of it. 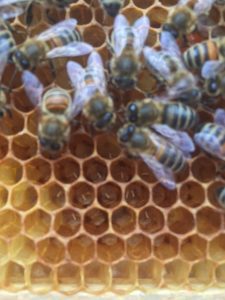 …and another did not survive

Another swarm control split was not so fortunate – it no longer has a queen (she may well have been eaten by a bird on her mating flight) and instead the female worker bees are laying eggs. They have not mated and so the eggs they lay are unfertilised. They also have no idea what to do and, as you can see in the photograph, lay multiple eggs in cells. 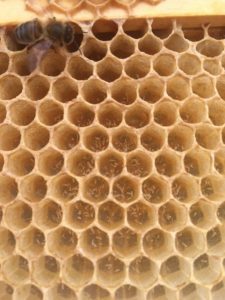 Another colony with an older queen created supersedure cells. She seemed fine to us but the bees knew something was wrong and set about replacing her. This is the new queen – she is bigger and lighter in colour than the worker bees.  At the moment we have 5 new queens and 3 colonies with queen cells that hopefully emerged last week. 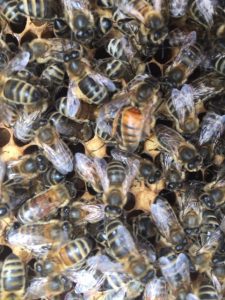 Emergency queen cells are created when there is suddenly no queen – perhaps accidentally squished by the bee keeper. An egg that was originally destined to be a worker is transformed into an emergency queen.