At last we have begun the arduous task of installing the permanent paths into our ‘Enclosed Garden’. The blousy, overgrown holly hedges have been ‘pollarded’. To do this, we have cut them down to approximately one metre in height and hope that in the warmer months they will send out fresh shoots and begin to grow anew into an orderly, thick hedge which will, once again, enclose the garden area creating a protected microclimate. 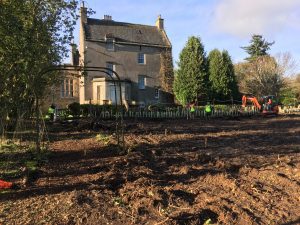 We have been fairly lucky with the weather for a ‘normal’ November, usually, would be a lot wetter than this month has proved to be. However, it is still quite muddy and slippy underfoot and at times it is hard to believe that in six months or so this will be a colourful, flower-filled space with solid paths and neatly edged beds.

In the late 1600’s, when our House was being built, frequent wars and the need to provide an army was waning. Consequently, wealthy landowners could lavish money on their homes and gardens and certain fashionable styles became popular, even desirable. It was important that the house was clearly visible at the centre of the estate with paths and vistas emanating in grid patterns or diagonals from this central position. 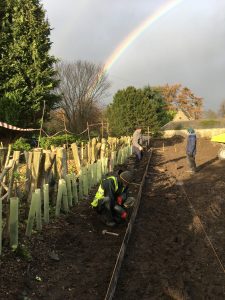 Now that we have reduced the holly hedges and cut away some of the self-seeded young trees that were taking over the garden we have restored some uninterrupted views of the House once more re-establishing its importance and dominance of this site. This also allows more air and light into the House and that can only be a good thing.

We were lucky to escape the worst effects of the weekend storm ‘Arwen’ without any obvious tree damage from the high winds. Fortunately, the House sits in a natural hollow so it is sheltered from the worst of the North and West winter winds and seems also to have survived the blasts undamaged. 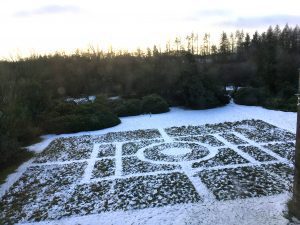 However, the area is prone to heavier frosts and can be a few degrees colder than the surrounding countryside at times. This means that a even a light sprinkling of snow can last a few hours longer so it was a treat to be able to catch the grass pattern on the South Lawn clearly revealed by the undisturbed snow lying on the mown paths.

As we reach the Season of Advent, it is almost time for our Christmas Fayre and there are busy preparations happening all around. Evergreen boughs have been cut, branches festooned with scarlet holly berries and shiny laurel leaves, tinsel, bows and Christmas ornaments are appearing on staircases and fireplaces. Young reindeers have even been seen gathering in large numbers eager to build up their stamina before the Christmas marathon. 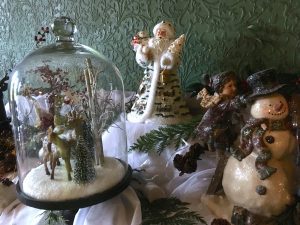 The house has been swept clean till it sparkles and twinkling Christmas lights are being hung in Santa’s Grotto ready for his celebrity appearance. The weather looks like it might be milder this weekend so whilst it might not feel Christmassy outside, you can be sure that a warm welcome awaits you for the Festivities.